„After President Trump’s futile attempts to forge a deal between Israel and the Palestinian Authority, many in the Trump administration now appear to recognize that the PA is not really interested in peace at all. Although the diplomatic corps has been reluctant to walk away from its longstanding investment in the PA, the annual assessment of world terrorism released today by the State Department suggests that it, too, is finally coming around. 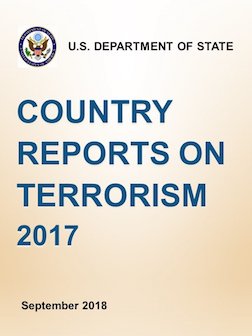 The secretary of state is required by law to provide Congress each year, by April 30, “a full and complete report on terrorism” from the previous year. The Country Reports on Terrorism, or CRT, as it is known, provides an annual glimpse into U.S. policy regarding nearly every nation on earth, some of which require only a paragraph or two while others go on for pages.

Israel, forever adjoined to the Palestinians, is described in one of the longer sections, titled “Israel, Golan Heights, West Bank, And Gaza.” During Barack Obama’s presidency, this section reflected a naïve trust in the PA and its president, Mahmoud Abbas, and a marked departure from the Bush-era’s skepticism about the PA’s ability to make peace.

This year’s CRT, the first of the Trump administration, was produced during a chaotic period, under two different Secretaries of State, following some very public resignations and a hiring freeze, and under the direction of a new boss of the Bureau of Counterterrorism (Nathan A. Sales). The report, released yesterday at noon, suggests a change is underway at the State Department.“ (…)