Alejandro Macarrón, a Spanish demographer, spoke to participants in a July 27 Middle East Forum Webinar (video) regarding the future ramifications of the West’s declining fertility rates.

Throughout the West, fertility rates (the average number of children born to a woman over her lifetime) have dropped well below 2.1, the level needed to avoid net population decline. According to Macarrón, there are three main consequences of having more deaths than births among the native population.

This will adversely affect the economic power of the West relative to the rest of the world. Although higher productivity has enabled the West to maintain its economic dominance in years past, the rest of the world is developing rapidly and narrowing the productivity gap. In a quarter of a century, China is expected to have approximately four times the GDP of the U.S. India will likely surpass China, due to its much higher fertility rate. The geopolitical ramifications of this shift will be far-reaching. 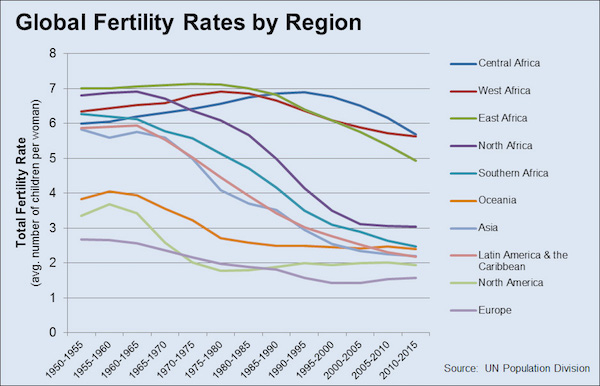 Second, Western countries are experiencing a steadily aging population and workforce. GDP and tax revenue growth won’t keep pace with spending on pensions and healthcare. If there is too much transfer of wealth via taxes from the rest of society to pay for the needs of an aging population, the imbalance will drain the economy. Democracy will become „gerontocracy“ because older voters dominate at the polls, advancing their interests.

Finally, low fertility rates will continue to create pressure for mass immigration into Western countries to meet the demands of labor markets, which can have deleterious cultural and political consequences. Immigration into the U.S., with its large number of Hispanics, is more assimilable to its prevailing culture than immigration into Europe, which has experienced in recent years a large influx of Muslims, who often choose not to integrate culturally. Europe’s native population, which has traditionally been more homogeneous than that of the U.S., has undergone a very sudden change with the immigrants. Macarrón estimates that 25% of babies born in France are from first-or second-generation Muslim immigrants; in Germany 15%, in Austria 14%, and in Spain, approximately 10%. If these increasingly „varied and complex“ societies do not manage foreign immigration carefully, there could be severe „social clashes“ in the future.

Macarrón attributes the plunging fertility rates in the West to changes in societal values unrelated to economic wealth, such as the decline in religious observance, the prevalence of abortion, and the deemphasis on building families and stable marriages. Also contributing to the decline is governmental neglect in fostering the message that population growth is linked to a country’s power.

Continuing demographic decline will make the West „less and less relevant,“ said Macarrón. The U.S., a younger country with a still dynamic economy, continues to have a growing population, but Europe is „stagnating.“ It used to be called „the old continent“ because of its history and traditions. „Now we are ‚the old continent‘ because we are old.“

Marilyn Stern is communications coordinator at the Middle East Forum.